I’m going to start this post by saying I am no graceful ballerina. As a child I toe-walked so much that I was seen by a neurologist. I had zero athletic ability– in fact, I distinctly remember thinking that I could run faster if I held my arms straight behind me and ran half bent over. Luckily no video evidence exists showing this amazing technique I invented — but if there was…. it would bluntly show this is not an acceptable way to run. I subsequently have another vivid memory of being taught to pump my arms when I run. I mean…. that’s just who I am.

I somehow made it through my childhood without breaking any bones or having any major injuries. But then– in 2015 I fell and broke my elbow, and in 2016 I fell and broke my knee. These injuries were not subtle… both times the same word was used when the fractures were described to me: “spectacular.” What a word to use… both times! It was as if these injuries were graded on the same scale as fireworks, leading to shock and awe. When in reality– I had slipped on some tile, and landed directly on my kneecap in one of the most un-sophisticated and least interesting accident stories of all time. Both injuries- elbow and knee- required surgery and months of rehab for me to get full use of these joints again.

Elbow rehab was incredibly intense. I would work for days to try to touch my ear, then a wall I was standing a foot away from. It was so painful, too– but I remember repeating to myself– YOU NEED YOUR ARM– and focusing to just get it done. And I was able to see progress– it was so gratifying. It was during this time that I also found my strong preference for icepacks. This one was the absolute best– big and bendy enough to wrap around the whole joint. Aaaaah… it felt so good. Now, I have full range of motion of both my elbow and knee– which is because I was diligent with my exercises, and had amazing physical therapists who pushed me to succeed.

So that all goes to show that I am no stranger to either physical therapy or pushing myself, even when it sucks. But, this time around none of my limbs were damaged, and no one really knew what to expect after my surgery — it was unclear just how much therapy I would need. But–with loss of sensory and motor function (luckily not all!) this time around, I needed both occupational therapy (to regain use of my left hand) and physical therapy (to focus on walking, balance, safe movement, etc.)

In the last 5 months I have COME SO FAR! Right after the surgery– I know I wrote about this before — but I had to spend a few days in an inpatient rehabilitation hospital for intense physical therapy because it wasn’t safe for me to come home.

At first, these little tasks were SO HARD. I was dropping little pieces of crumpled up napkins into cups, stacking the cups, unstacking them, trying to flip them over. And anything with cards– working to regain those fine motor skills that seemed to have vanished in an instant. Now, I’m right-hand dominant, so my left hand was never the star of anything I did, but I’ve worked hard to gain the skills I lost back and now am using it to knit, type, cook– I’m completely able to do the things I want and need to do!

My physical therapy improvements have been equally rewarding. And, I would bet that I am going to be more coordinated after this than I was to begin with– granted, I had a pretty low bar on the coordination metric to hit– but I’ll take it!

At the beginning– I was so wobbly! I couldn’t walk without looking straight down. I needed a spotter all the time. I never fell, but I was extremely cautious.

But this was me yesterday! 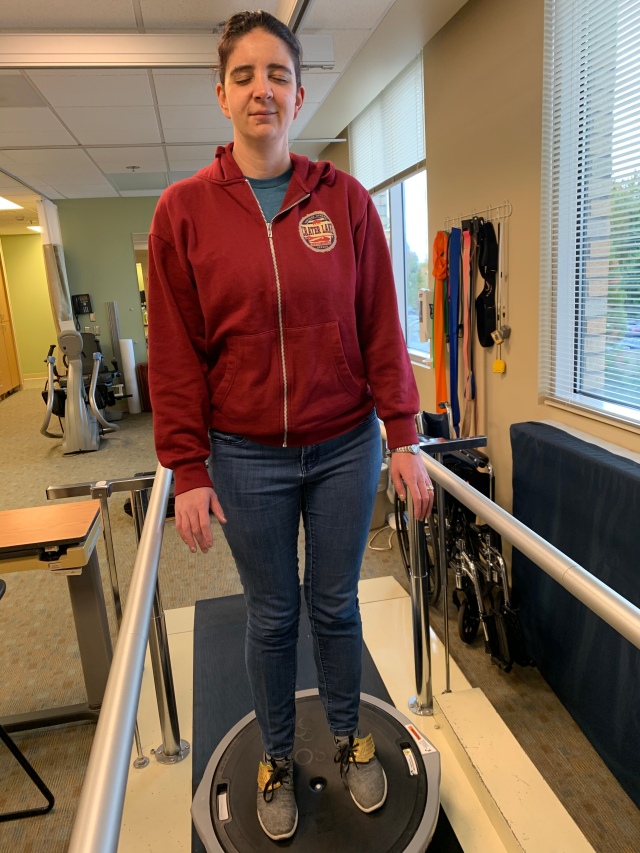 Look at that– I am balancing on an upside down Bosu ball with my EYES CLOSED! I mean, I know this situation would never have come up for me in real life ever before, but I am sure I could not have done this. My left side is still (and will be) with much less sensation than my right, but still I can balance on this jiggly gel pillow thing!

I LOVE my physical and occupational therapists– I’ve seen them help so many people during my career in medicine, but even more so– now as a patient. I’m able to focus now on other things– like Oligo ACTION items– because I don’t have to think so much anymore about walking to the kitchen, or how to take a shower, or other things that were so exhausting and difficult just a few months ago.

3 thoughts on “My Ode to Physical Therapy”