About 3 weeks ago we took the plunge and got a puppy. This wasn’t a very pre-meditated decision… we discussed it a few months ago, as a “someday it would be fun to have a dog” kind of conversation. But, gradually the idea of “someday” seemed too far away. Plus I’m home way more than I used to be these days– and when I go back to work I won’t be as available, so the timing actually seemed great (if there is such a thing as perfect timing for a puppy….)

His name is Mitchel, but he goes by Mitch. He loves to chase balls that are rolled along the floor. He also loves to chase ankles that are running by. He especially loves to sniff the ground and try to convince you that he is right about to pee on the floor– but then not go when you bring him directly outside. He’s a sucker for a belly-rub. He understands he sometimes needs to be in the crate and that’s ok. He loves turning the roomba on. He also loves to try to eat backpack straps and jacket sleeves. He’s pretty cuddly and very tolerant of the games the kids play with him. 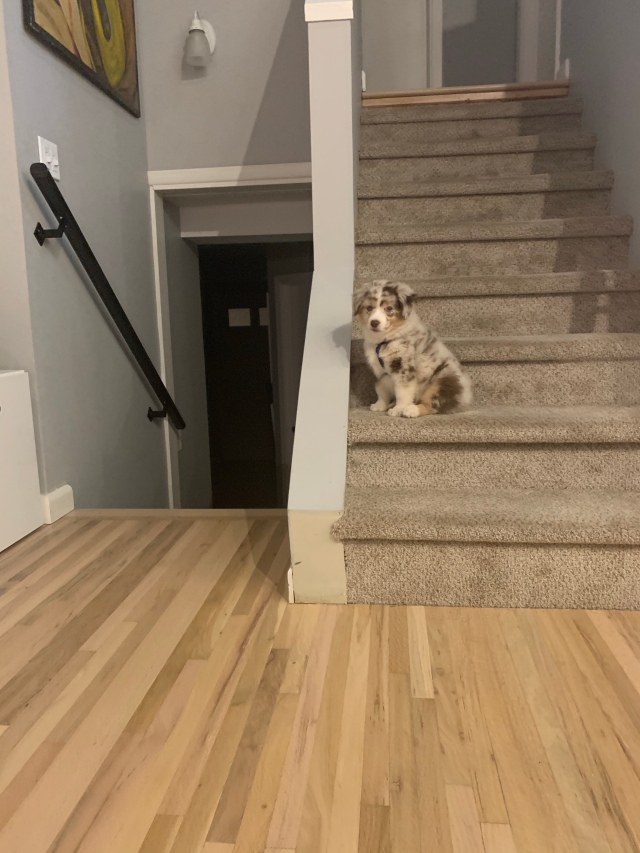 He’s forced me to slow down my already slowed routine. I don’t scroll through facebook as I drink my morning coffee anymore since I’m watching him to make sure he isn’t chewing on a cord or dragging his food mat across the floor. It’s taken me 2+ weeks to blog about him because taking care of him is so time intensive. If he isn’t in the crate, someone has to be watching him at all times– just like a toddler. Luckily, he also naps quite a bit, and we’ve been crate training him so that we are able to successfully leave the house for a while, or leave him be while we are in other parts of the house. We’re teaching our kids how to help with supervising him, too– but so far they mostly just announce loudly when he is peeing on the floor instead of being able to catch the warning signs (although admittedly all the adults in the house also sometimes miss them…we just are better about immediately taking him outside if we suspect it) Right now he is lying under a shelf maybe half asleep but I expect in the next 10 minutes he’ll be up and I’ll be taking him out again. Fool me once… ok twice… 😉

Mitch has definitely added to the busy-ness/business of my day-to-day life, but I know over time he’ll need less supervision, and also be able to do more out of the house– right now he’s too little to go to parks or on trails etc since he hasn’t yet had all of his vaccines yet, so we spend a lot of time at home together. I have signed him up for some puppy classes in the next few weeks, so as I space out my PT sessions, there’ll be more time for puppy training. All the little boys in this house need to learn their manners during their child/puppy-hood– Mitch obviously included.

2 thoughts on “From Stage Right enters a new character: The Puppy”