I wrote here about being chosen as the recipient of the 2020 Ripples of Hope Award. Man, what an honor! Did I mention that TOM BROKAW won last year? Yes.. yes I did mention that– I still can’t believe it!

How does someone follow Tom Brokaw? Well, I’m not entirely sure, so I just ignored that part and focused on myself. As I’ve been thinking about writing about this event– there are just so many parts I want to share, so I’m going to break it up into a few different posts and topics.

This post I am going to devote entirely to the award itself and share my acceptance speech, or what I intended my speech to be 🙂 When I was up on stage I left parts of it out unintentionally– but luckily they weren’t super important parts, and it still flowed well. I’ll try to link a video of what I actually did here as well.

The award itself is a beautiful glass swirl pattern, with lots of different colors. It’s beautiful, meaningful and now is a prominent addition to our “display shelf” next to the lego creations my children have made, and our wedding albums. And! It came with $25,000 for Oligo Research!!!! 🎉🎉🎉 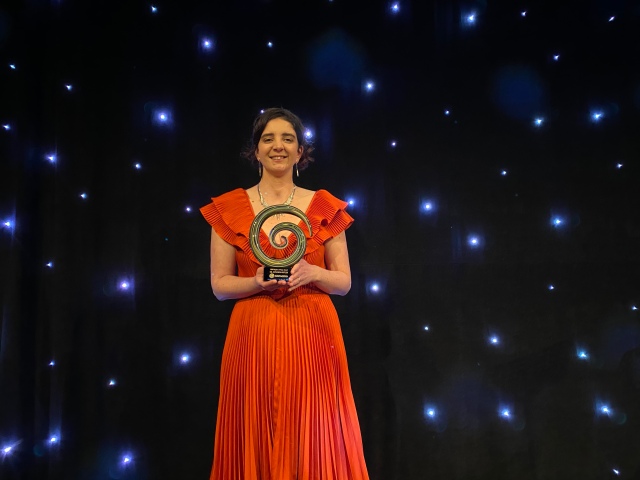 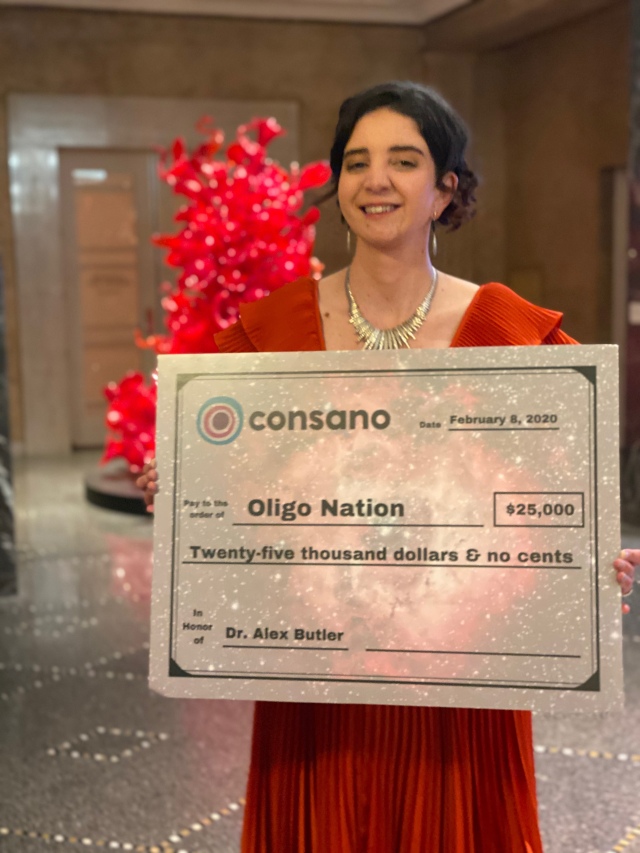 First, I have to say a huge thank you to Molly and the entire Consano team. I am so honored to have been chosen for this award. For the past 10 months I’ve felt like a cartoon version of myself— frantically whirling around, kicking dust clouds up in every direction— trying to grasp what has happened to my life. And sometimes that feels pretty isolating, but– other times— like tonight— I just feel so much support, and like I’m on the right track— that means so much to me. Thank you.

When my Husband and I told our 7 year old what was happening back in April when I was diagnosed with brain cancer, we explained that my arm had been feeling funny, and so I saw my doctor who ordered some tests which found 2 tumors in my brain that shouldn’t be there. After explaining what a tumor was, we paused to see what questions he had. After a moment, he said— “Well, what are you going to do about that??”

Well, What are you going to DO about THAT?

Now never mind the fact that this same boy said the exact same thing recently when he found out that our dog could escape the crate. This question— What am I going to DO about THAT has been repeating in my head since April.

And as it turns out, finding an answer to this question has been nothing short of terrifying. Modern medicine is inadequate when it comes to oligodendrogliomas, or oligos for short. And there are several reasons for that. One is that the genetic markers that now define this type of cancer have only been known for the past few years. Prior to that it was often studied and grouped with other types of glioma, and so if you look at data that was published more than 4-5 years ago, its really hard to know what even applies. It’s also super rare with maybe 1500 people diagnosed a year, approximately 15K patients nationally today. Having enough people— both patients and scientists take part in meaningful research is hard. Another reason why there aren’t good answers is that pre-clinical research and modeling is extremely hard to do. Oligo cell lines are notoriously difficult to grow and they grow too slowly to be studied in many animal models. Other types of brain cancer are more common and easier to study, and so often oligos have been overlooked. Because of these challenges, there’s no prescriptive answer to my son’s question, no set protocol. The truth is the experts in the field are not sure what to do with us. Radiation now or later? Chemotherapy or immunotherapy? The truth is that we need more research, and data from clinical trials that include patients like me to know what to do.

Ok— so what am I going to do about that? Well, like any self respecting mellenial, I googled. I messaged anyone who used the hashtag oligodendroglioma anywhere on twitter, facebook or instagram. I contacted brain cancer non-profit groups, I spoke with doctors, researchers and other patients. When I met Molly I had no idea where to even start, but I knew starting was the only option. And Consano has not just been a starting point, but a runway for me to gain traction and direction in order to figure out how to find an answer. In addition to Consano, I’ve been working with another non-profit called Oligo Nation which is creating a biobank, or repository of oligo cell lines to make pre-clinical research more accessible. Together we have been raising money.

Nonetheless, as of today I still don’t have the answer that I’m looking for. It would be easy to stand up here and say a few things about making the best out of a terrible situation and gloss over the rest— you can’t tell it now, but after my surgery I had to re-learn how to walk and how to use my left hand. I have worked hard to regain that control of my body, and I’m not afraid of the work. But all that went into my recovery is not enough. I need to get more done. So now, in addition to focusing on being as strong and as healthy as possible, I’m also figuring out a new kind of balance, between working to find an answer to this question, while not being consumed by it. I can describe this most easily by saying that life now is like a scary movie, where you see a blurry, terrible monster creeping slowly towards you from a distance. You know it will take time to get to you, but the fact that it will get you is inevitable. Thankfully, I do have time, hopefully years, and Ideally I can shrug off the weight of this inevitability and just live and be happy. But I also have my eye on this monster, and have absolutely no intention of forgetting or ignoring that it is coming, or just waiting for the inevitable to happen. With momentum, as we have seen in targeted treatment development and advancements for other types of cancers, things can change quickly. And so I am working to find out what is on the horizon for patients with oligodendroglioma like me, try to get us there a little faster, and cut this monster off in its tracks.

The last thing that I’ll say is that when anyone is diagnosed with cancer or any life-threatening disease, that person’s whole network of support is tested and pushed. Sometimes it crashes down because it wasn’t strong enough to begin with, and other times it just seems to get stronger. My support network has been unwavering with so many of you included. And I would not be up here today without that. There have been many moments where this has all seemed like too much, like I couldn’t breathe. There is an overwhelming sadness that floods in when I consider that oligodendroglioma is something that I may not be able to overcome— because as it stands now, it cannot be done. In those moments, when I get sucked down by all of this, I’m buoyed back up by that support system, by my family, and especially by my husband who has ALWAYS been by my side, is a true partner in life, wherever ever that leads.

So in accepting this award, I promise to keep working with you, and with Consano to keep finding better answers to what am I doing about this? What am i doing to improve my chances and those of the other patients who walk this path with me? So that one day I can be old. And tell my son how his innocent question Gave me the power to push through the hardest part of my life.

It was amazing to be able to say all of this in front of so many people comfortably. I’ll write another post later about how I prepared for this– definitely was out of my comfort zone, but I’m so glad I was given the opportunity, and was able to make myself proud!

2 thoughts on “Ripples of Hope Award and Speech”